A Review of the 2nd Stanford Drug Discovery Conference, Part 1

I found about this exciting event on Friday, about to happen today, and the first thing I did was sign up, as it was free for the public. My alma mater always puts on the best shows (very objective I am), and the price was right (along with excellent Stanford Dining supplied lunch, coffee, dessert...). I did have some things to do this morning, so I arrived about two hours into the event, and still I ended up taking enough photos of slides and taking enough notes, I am going to split this into two posts.

The program details are linked below. 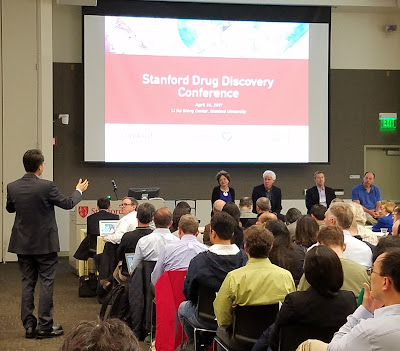 One of the first astounding things I heard this morning was that NO off-target effects have apparently been reported with CRISPR either in mouse or in human models! There appears to be some modicum of disagreement on this, but more later.

Another cool thing I learned of, is a company that proposes to use cell free RNA to monitor various health and disease conditions. They got a nice and well deserved plug. Link below. 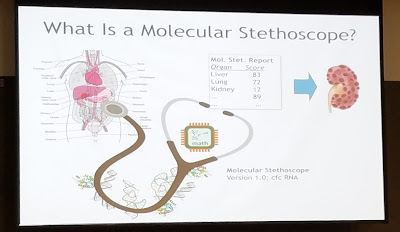 One more excellent presentation was that of Stephen Lin from CIRM, reminding us all of the wisdom of California voters in creating CIRM through Proposition 71 at a time when the Federal Government made several narrow-minded choices on restricting stem cell research. CIRM's creation has made power houses of Universities and Teaching Hospitals up and down the state, and CIRM is on a roll, with $700mn more to give away! 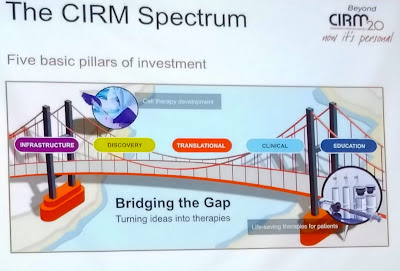 I had a standing lunch, off excellent Italian food, steamed potatoes and beans, chatting with a gentleman, when he pointed out this to me. If true, it saddens me, but kudos on some well timed marketing!

The plane was fast, and the phone didn't do a great job, but it says "Stanford unfair to disabled workers". I will try to find out more about this.

The Post-Lunch Industry Presentations were indeed quite exciting! The presentations were from Novartis, Amgen and Takeda, each offering a unique perspective, all praise to whoever picked the three choices. Here are some observations: 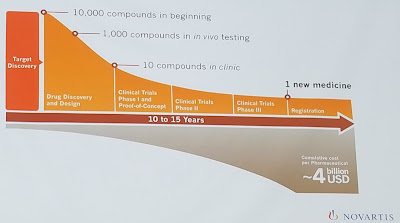 1. Novartis needs to be involved earlier rather than later in drug development.

2. Novartis – “We innovate in isolation, we prescribe in combination”. This was in reference to their attempt to prescribe a combination of therapies, and this appears to be a recurring theme, especially in oncology, something I have observed over the past decade.

3. "We need to innovate a new science of therapeutics”. The idea here is that there are many diseases to fight and more work needs to be done. The presenter also alluded to CRISPR's potential for helping create new therapies.

4. The presenter also left us with this really nice reminder that when companies and academy share capabilities through collaboration, success can be achieved.

5. The presenter from Amgen stressed how important it is to first identify the correct targets, and not simply try to fit modalities to targets, or pick the wrong targets and then ask biologists to come up with satisfactory animal models for test. With focus on modalities, you say, “I have a hammer and I am looking for nails”. I can definitely relate to this quite well. My first position, right off academia, was as a Front-End Research Scientist, and my manager wanted me to do both - identify diseases and try to extend our existing, patented technologies far and wide. This has always stood with me as great strategy and I don't see why it wont work well for drugs, as well as it does for devices.

6. "Be extremely disciplined in the scientific approach you take." He reiterated that even though this might sound cliched, that it is very important. Again, who can disagree?

8. Perhaps the biggest takeaway of his presentation is of how nearly half of Iceland's population has had their genome sequenced! From this, various therapeutic and other knowledge can be gleaned.

9. From the Icelandic population, it was gleaned that people with very very low Cholesterol LDL levels had a PCSK9 protein mutation. Similarly, a French team found that a mutation caused others to have very very high LDL levels. More such discoveries are possible through genome sequencing.

10. The speaker from Takeda mentioned headwinds and tailwinds affecting the industry. 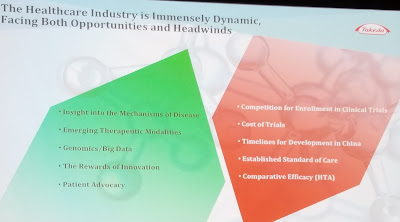 11. We are able to basically target any gene with small molecules. This can indeed lead to lot of therapies.

12. In today's world, the patient's voice is valuable. We will come back to this in the second part blog post.

13. "If you look at the top 10 pharmaceutical companies, there is not a single one saying, give me a “me-too” molecule and I can commercialize it." An interesting rebuttal follows in the next post.

16. Culture is everything. The science is important, but culture is very important.

18. Takeda has established a partnership with Nobel Laureate Yamanata to make “models for human disease” and then find therapies. 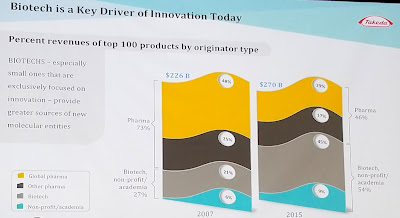 Enjoy the images and the notes. More exciting stuff to follow in Part 2!