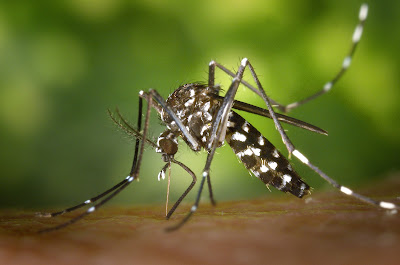 Rarely do people get to declare everyone in the world to commemorate a day as "World X Day", but according to Wikipedia:

World Mosquito Day, observed annually on 20 August, is a commemoration of British doctor Sir Ronald Ross's discovery in 1897 that female mosquitoes transmit malaria between humans.[1] Ross is responsible for the annual observance, having declared shortly after his discovery that the day should be known as World Mosquito Day in the future.

Well, if you make an important discovery and get Knighthood for it, I suppose you can make such demands and get them to be heeded. I don't see a problem here, but an opportunity.

As a nature lover, rarely do I wish that a species be controlled. The mosquito is definitely one such species. Mosquitoes have been cause of much grief for the human species (and their companion species, such as dogs and cats as well) the world over. First, the bite, ouch! Then comes the fact that they are a malaria vector and a vector for other diseases . Followed by incredibly dangerous chemicals such as DDT that caused all kinds of health issues and environmental damage, while the mosquitoes happily evolved to be resistant to DDT!

Therefore, it is important to consider a few things on our battle with mosquitoes:

1. It is important to fund research that looks at controlling mosquitoes, eliminating them in non-native regions, research on reducing their ability to act as vectors, and disallowing them from being able to reproduce as profusely.

2. Standing water is one of the best breeding "grounds" for mosquitoes. Such bodies must be treated to prevent mosquito breeding, and where unnecessary, standing water must be eliminated. If not, birds and fish that eat mosquitoes should be encouraged.

3. When you go out, make sure you wear protection, preferably non DEET based materials. Where possible, such as when you camp, use mosquito nets. Remember, some of the chemicals like the mosquito coils, which you set off using a match, are suspect of containing carcinogenic materials.

Be safe out there!